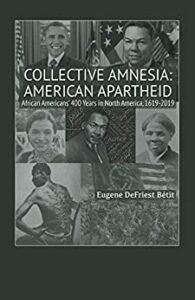 Issues surrounding racism has continued to generate lots of challenges in America over the centuries. The author of this book did a great job of going back to the origin in 1619, and did not only trace how it all started, but equally explained with overwhelming evidence why the unfair system still plagues the society today.

African-Americans have been stereotyped as violent in nature, inferior in intelligence, and having penchant to indulge in crime among other derogatory character traits. However, the truth as elaborated in this book is that such assumptions are wrong, especially if one could go beyond the face value. There were indeed some dishonest policies and road blocks that were specifically put in place to keep the African Americans down.

Collective Amnesia: American Apartheid will not just enlighten its reader on the evils and consequences that slavery or the stigmatization that goes along with the entrenched apartheid system has done to Blacks, but also proffers possible ways to overcome it.

The book will no doubt open the eyes of many to the horrors and inhuman degradation African Americans suffered across generations and why issues like “Black Lives Matter” are yet to be resolved.

A must read for anyone who values humanity!

BIO: Dr. Eugene DeFriest Bétit served twenty years in the US Army as a military intelligence analyst and German and Russian linguist from 1966 to 1986. After selection for the Soviet Foreign Area Officer’s program, he studied Russian at the Defense Language Institute in Monterey, California; the US Army Russian Institute in Garmisch, Germany; and Georgetown University, where he received a MA and Ph. D. in Soviet Area Studies.