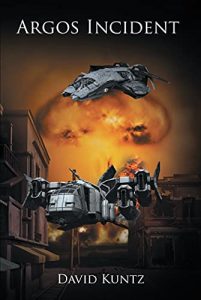 Sara Martin alongside others was tasked to destroy a power station in outer space. However, unknown to them, they were expendables and had been set up to be obliterated in the mission. Fortunately for Martin, she survived just by the whiskers but her mates weren’t so lucky. It was the mother of all betrayals and she was determined to go avenge the deaths of her team members at all cost, just like she did for her murdered parents.

Argos Incident is a no holds barred thriller that feels very much like watching an action movie. It is a highly engaging science fiction, complete with planetary bodies where humans and robots inhabit.

The red herrings, intrigues, betrayals, blackmails and passion contained in the plot are all top notch—a book no one would want to drop for a second until they get to the end.

BIO: David Kuntz was born in Logansport, Indiana in 1953 and grew up in Bridgeport, Ct. David attended Texas Christian University where he received his nursing degree. Over the course of his schooling, he studied chemistry

He is a science fiction author and has written four novels in the New Horizon series. The New Horizon is a freighter with Stan McDermont as her captain. The crew of the New Horizon find themselves getting into trouble and forced into adventures they would like to avoid.