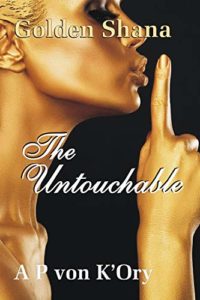 The story began with adrenaline pumping suspense right from the first sentence and the momentum continued to build up as one read further. Unlike the others in the series, the plot began from the viewpoint of a different character other than Roman. However, Roman still remained the centre of attraction as different women jostled for his love. Marie who was already pregnant with his baby and trying all she could to hide her unenviable origin from Roman, was in contention with Shana Golden.

Despite the fact that The Untouchable is not being viewed from Roman’s perspective, it still has its own fair share of erotica and wild love making, the only difference being that it was taking a notch higher than the others.

Marie’s view of the story provides an exciting contrast, albeit one that is suspense, action and even horrifying as she battles her antagonist—a psychotic wicked uncle who was hell bent on making her life miserable.

Just like its peers in the series, The Untouchable is adorned with lots diverse locations across the world as well as intriguing historical facts.

The way the author wrote Golden Shana: The Untouchable’s is a little different from the others in the sense that the story was not told solely through Roman’s eyes, rather through other characters as well and it equally has more dimensions to it which made it refreshing switching from sex scenes to suspense scenes, especially when it comes to Marie’s perspective.

The Untouchable is a thrilling masterpiece and there isn’t any drawback I found in the book.