Home > A boy on an island in danger 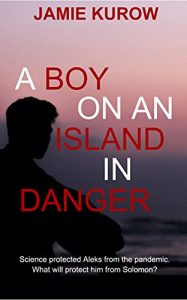 An apocalypse of sorts had devastated the earth, destroying almost the entire nations and continents. However, a family and a few other groups who were being quarantined on a small island had managed to survive by just shear providence. Nevertheless, while they’re marooned in their small island, danger still lurked in most other parts of the world, as a deadly and highly infectious disease continues to spread. The only hope they have of remaining safe is to remain totally isolated from the rest of humanity ravaged by the deadly disease. Unfortunately for them, while they can successfully wade off small yachts and boats that try to berth on their island, the appearance of an imposing schooner with possible hostile intentions.

While the Schooners had guns and canons, the threatened islanders could only boast of razor blades, fishing line and hooks—a total mismatch.

Would the Professor be able to save himself, the orphan that was left in his care and a few others in a world that has gone bonkers?

BIO: Jamie Kurow has been writing in one genre or another for more than 40 years. He enjoys living in a small fishing town on a small island where his imagination sometimes flows as freely as the local red wine.