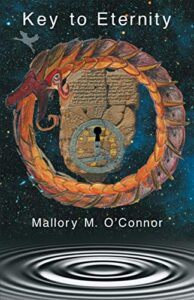 Epiphany has succeeded in bringing her entire family, made up of her aged mother, son and granddaughter, to live with her in Florida. However, things were beginning to get a lot more complicated. Little Maddie was already showing signs of possessing the same supernatural gift her grandmother was born with…

Maro has been trying to trace artifacts that were stolen from the Bagdad museum, during the 2003 U.S. invasion of Iraq; without much success and he thought Epiphany could be of help. He hardly believes in psychics and their works, but Epiphany had always produced amazing results during investigations that would ordinarily have been near impossible to crack. This time, Epiphany could help track down the elusive Derrick Rarian and his syndicate.

Key to Eternity is a sequel to Epiphany’s Gift, and just like it, this book is a classic paranormal novel that is exciting to read.