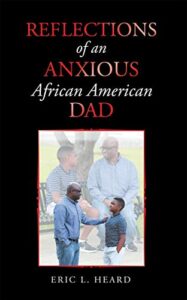 Surviving as an African American in the South back in the 1970’s, and the years that followed, was a very tough experience for many and Eric’s case was no different. The lack of acceptance and widespread racism/segregation in the society combined to make interpersonal relationship with his parents and extended family tumultuous. Several decades later, Eric became scared and wary that the unpleasant experiences he had during his developmental years could also affect his son, McKinley.

Characters in the book include Grandma Eileen, Granddad Joseph, Aunt Geneva, Uncle Lawrence, Marvin, Angela, and Laquita among others.

This book is a true life story that is quite as touching as it is enlightening. It perfectly captured some of the unsavory situations and conflicts African Americans find themselves in, with far reaching consequences to them and the society.

Reflections of an Anxious African American Dad is an emotional but interesting story that would be an eye-opener to young people, while engulfing adults with nostalgia as they reminisce on how things used to be.

BIO: Eric L. Heard currently lives in Bowling Green, Kentucky with his wife, Sonya, of 17 years and his son, McKinley. Eric is a graduate of Florida State University with a BS in Engineering. He also has a Master’s Business Administration from Indiana University and Master’s of Manufacturing Operations from Kettering University. He is an Army Brat who has lived in the Southeast United States, Germany, and Japan.