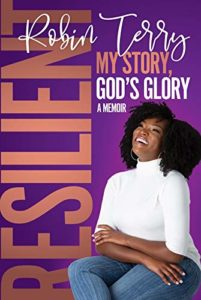 The moment I started turning the pages of Resilient, I realized it was going to be a book with a difference. Soon, my gut instinct was proved right! This has got to be among the most heart rending stories I have read in recent times, and this is coming from someone who reads a lot.

I had to battle with myself in trying to hold back the tears as my emotions got the better of me, yet my eyes were moist all the same and a few drops of tears ran down my cheeks.

Resilient, a very apt title I must say, is about a girl named Robin who like most other girls of her age, felt she was in love with a boy named Austin but little did she knew that Austin was a wolf in sheep’s clothing, a predator who eventually preyed on her innocence and naivety. Robin got pregnant at a rather tender age of fifteen and it seemed her whole world came crashing when Austin refused to take responsibility, and her Dad who was still hurt that his lovely daughter has become a teen mother, distanced himself from her.

Resilient is not just a book filled with lots of life’s lessons but one that could break anyone and it is even more so when taking cognizance of the fact that this is a true life story and not some farfetched fiction.

I would certainly rate Resilient among the classics I would not only recommend to others but also keep by my side to be re-read every now and then.