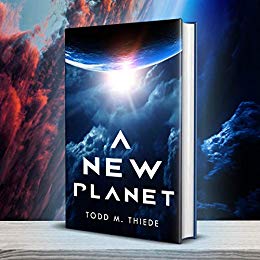 The New Planet began on a tense note as Set and his team members put up a spirited effort toward saving the planet from possible catastrophe. Just like most other thrillers, the suspense hung thick in the air which makes the reader to have a sense of foreboding.

Xiao was largely seen as a good man by the locals despite being a politician, and the onus fell on him to coordinate the evacuation process as the supervolcano was about to erupt and incinerate everything within its radius in the Northwestern Hemisphere. Reading through the book creates the sort of image and emotion one could feel when watching a movie that is about mass hysteria due to a possible disaster of apocalyptic proportions.

The New Planet is all about a catastrophe and the desperate efforts made in trying to contain it and to save as much lives as possible. Tal was as beautiful in physical appearance as he was in his soul, and his penchant for taking deadly risks just to save lives earned him the character of a classic hero and not even Jae’s fears could deter him.

Divided into three parts, the book has a rich plot that is complimented with a vast array of well-developed characters.  It is quite interesting by all standards and is among those types of stories one wouldn’t mind to read over and over again!

BIO: When you think of an Amazon bestselling author you probably won’t think of Todd M. Thiede. He’s been a finance manager at a car dealership in Illinois for over 15 years. He’s a father of 4 and now a grandfather of 3. When he’s not working or spending time with his family, he’s writing books. His Max Larkin Detective series has been on Amazon’s Bestsellers list for multiple books in the series. He’s also written Political Thrillers under the pseudonym T.T. Michael, and those books have won multiple awards from Readers’ Favorite and Book Excellence Awards.
Todd M. Thiede is now diving into the Sci-Fi world with his new book “A New Planet”.