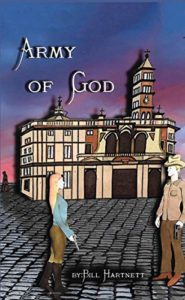 The book began on a pulsating note as two hit men; Lucas and Janos were sent by their respective bosses to deliver on a task that involved getting rid of a dead man. However, things didn’t go exactly as planned because Lucas has his own plans and thus had to eliminate Janos. Killing Janos and dumping him into the river may have become necessary to cover his own tracks but murdering a priest right inside the cathedral a while ago was an act that would haunt Lucas as it triggered off a chain of events that connected as far as a decade before.

The story took a quick but complicated turn when Angie was informed by the police that her cheerful and loving husband had committed suicide by jumping off a bridge into the waters while leaving a suicide note behind, but incidentally, his body was never found. While she was still grieving, Carlos arrived at her home to tell her a surreal story of how Andy’s presumed suicide mirrored that of his father over a decade ago until recent events proved it had been a false flag all along.

Angie had to join forces with Carlos, along with Siobahn; her old friend who now worked with the Interpol. The trio was determined as each had vested interest in getting to the end of it but that will mean crossing various international borders and of course going headlong against a deadly syndicate—it was indeed a great adventure ahead!

At 1540 pages long, Army of God is no doubt a voluminous book but the good thing about it is that Bill Hartnett did an amazing job of piercing together a rich and intriguing plot that combined perfectly with pretty well developed characters. This effectively ensured there weren’t any dull moment throughout the entire book.