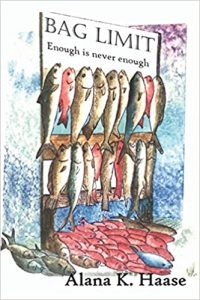 Captain Matthew Farrell was a good-natured man who fished for a living aboard the Reef Runner, in the Gulf of Mexico. Captain Matt was enjoying a modest living together with his family in Destin, but it wasn’t long before everything he cherished became threatened by new regulations.  The politicians want them out of business due to selfish reasons and would rather allow imports from Mexico!

Would the fishing community ever be the same again, now that everything is being challenged by a controversial law? Only time will tell……

The story was told through the perspective of Captain Mat. However, the plot is basically centered on the building of reefs and federal laws, and how it affects the fishing industry, particularly around the Gulf of Mexico.

Bag Limit also has its hilarious side that will certainly make readers to literally laugh out loud as they go through the book—a highly entertaining novella!

BIO: Bestselling author, Alana K. Haase has worked in the health care field for the past 30 years as a professional nurse, in multiple clinical settings including the ER, CCU,MedSurg and Home Health Care. She has always been interested in how spiritual and emotional health effects people physically. The only thing Alana loves more than taking care of people is writing, and dogs! Alana’s writing has been featured on Dumb Little Man, Tips for Life, Believer’s Bay, I Love Recovery Cafe’, Mom’s Fight Back and Stop Abuse Campaign. She is also the author of The Little Engine who Could Not…a devotional for codependents, The Little Engine who Could Not…a journal for codependents and Webs, a domestic violence awareness story. Bag Limit, Enough is Never Enough is her first work of fiction.