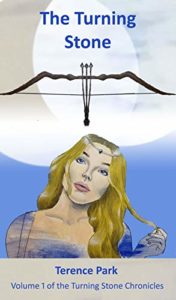 Terence Park completes a breathtaking work in The Turning Stone. This is the first story of Park’s that I’ve read, and I’m looking forward to reading more by this author. The story brings the reader into the journey of saving the world from chaos. He is one of those writers that grabs you into the story from the first sentence. He takes you through a journey and helps paint every moment in the book. I couldn’t put it down and read it straight through. The relationship between the characters who fight for the promise land. I was delightfully surprised at the text’s ability to change narratives and excite the reader. The tale of demons, immortals, and overall fantasy drew me in as a thrilling adventure. The author serves a riveting addition to the fiction genre by including mystical experiences throughout the book. From beginning to end, The Turning Stone builds reputability with its mastery of the English language to the point of building a poetic atmosphere with its audience through unparcelled use of correct grammar, spelling, and artistic ability. The book also serves a specific audience of seeking individuals who are looking for a slight chill to add to their weekend reads.

Park presents several characters, some of them very shady and full of revenge and they keep you on the edge of your seat. It is hard to figure out how this story is going to end until the actual end. Clues are given, but the plot keeps twisting and turning so the reader will have to wait until the last chapter to know for sure who the bad guy actually is which was riveting in itself. The story line is impeccable, and I searched deeply for plot holes but found no inconsistencies. The relationships between the characters worked to construct the dynamic of the story and allowed for a great flow of events between chapters. Each of the warriors who attempt to save the races of men have their own backstory and personality which add depth to the overall journey. I often found that each of the main characters were very well rounded in nature which served to the purpose of the overall novel. A round character is one that has depth. Round characters have weaknesses, strengths, flaws, fears, tastes, and dreams. They are well characterized in order to seem real. Furthermore, a round character is not static or inconsistent; it’s dynamic and changes over time. Round characters feel affected by the story’s events because they suffer their consequences and learn from them which makes them more realistic and believable.

This gritty, emotionally penetrating story that not only touches upon social concerns with roots in the past but reaches into the future. The characters have depth, and the dialogue is sparkling authenticity. Here’s a story where everyone has an agenda, there are more crooks than cops, and bullets fly with abandon. In other words, a deliciously twisted sci-fi mystery with plenty of danger and romance! All in all, it is an exciting, thrilling and thought-provoking story, which is excellently crafted with a very exciting ending.

BIO: Terence grew up in Stoneyholme, Burnley, UK. He developed a liking for SF /Fantasy to step outside the grim realities of sink estate life. In 1990 he qualified an an accountant. His four children have grown. In 2009, with plenty of time on his hands, he put pen to paper. His first work was the unfathomable Guide to First Contact. He has since written an account of the final years of Burnley Grammar School and his poems were collected in Silt From Distant Lands. Later works include The Tau Device (SF) and dystopian pieces like Writing Day and The Slow Holocaust. He is a self-publisher and currently has two titles ‘ready to go’.