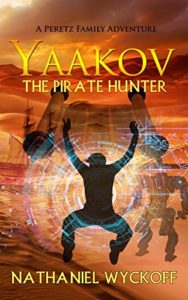 Yaakov the Pirate Hunter is a family oriented book that centers on a Jewish boy named Yaakov. It has a futuristic dateline with events occurring around the year 2025, and captured some of the fun activities children partake in while growing up as well as their perspective on sundry issues around them.

Other characters in the book are Yosef and Rachel; Yaakov’s siblings, their parents; Yehuda and Leah, their four intelligent robots; AutoRizer, AutoShoveler,  AutoGrubber, and Digital Drudge, Mr. Sitoop, Mr. Sapir, and Bobby the Brute among others.

Aside its intriguing plot that involved a treasure hunt, the book is equally educative and informative and covered many areas of study such as geography, biology, physics, history, animal science, archaeology etc.

Some of the attributes that make Yaakov the Pirate Hunter fantastic include the active roles the kid characters played in the book as well as the way scenes and events were narrated in a clear and concise way for better understanding. Likewise, the rich and interesting plot that involves going after pirates is the type of story that will capture the minds of kids in a fascinating and imaginative way.

Its ending also has lessons for kids as they are made to understand that crime does not pay.