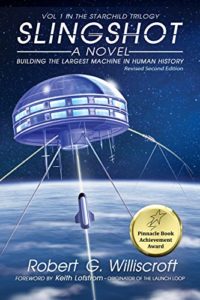 Alex and Margo were overseeing the ambitious Slingshot project. It would be a trail blazing engineering feat that would make space travel cheap and convenient for many people once it is achieved. Already, Amelia Earhart and her navigator, Fred Noonan who were working on a similar project many years earlier had mysteriously gone missing without trace, after their plane encountered some turbulence midflight.

Overtime, space travel with rocket has proven too expensive and unsustainable for mass movement of people and the Slingshot project was meant to a suitable alternative. It was planned to work by way of a specially made space loop that would convey people in cable cars to space in a convenient and cheap way.

However, working deep in shark infested waters with oxygen tanks as well as in extreme altitude wasn’t a tea party but the duo was determined to succeed no matter the challenges. Notwithstanding the natural barriers they must overcome, Slingshot project faced another serious trouble as North Korea put resources in place to sabotage it.

Slingshot is an intriguing book with lots of scientific conjectures that would push the imaginations of its reader to the limits.