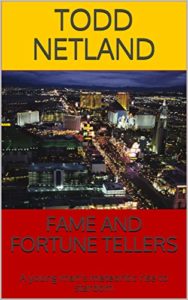 This book commenced with events that took place in early 1970’s California as two couples, Randy and Lila as well as Mike and Donna were celebrating Randy’s 30th birthday. However, an opportunistic encounter with a seer revealed that Randy Miller was going to be a great man in no distant time not minding his present not so enviable status. Mike instantaneously dismissed the revelation as fables but Randy believed it.

Although the plot largely revolves around the lifestyle of Randy and his family as well as that of Mike’s family, there are a lot of mentions about the scriptural verses, old and contemporary history, international politics and diplomacy etc.

At 450 pages long, Fame and Fortune Tellers can be said to be quite voluminous. That notwithstanding, it is a down-to-earth story that captures some of the common things that happen to everyday people. It has a relatable plot and characters people can easily identify with.

The plot took a twist when Randy was confirmed dead and he was taken to heaven where he encountered great men that lived during Bible times and he had a sneak-peek of what heaven looks like before he later resurrected.

The book is quite interesting and would be enjoyed by all, especially believers of the gospel.

BIO: Todd Netland is an accomplished pianist, composer, and arranger. He has traveled to more than fifty countries with Jon Stemkoski’s CELEBRANT SINGERS as a musical missionary. He currently resides in Pacheco, California with his lovely wife, Wendy Flagg-Netland. Netland has authored two books: FAME AND FORTUNE TELLERS and IS THE RAPTURE THE REAL DEAL