Home > For I Have Sinned 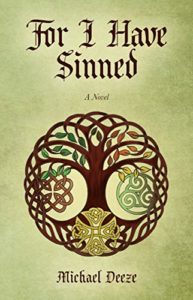 Right from the very first line, I could feel my adrenaline surge and I quickly realized that I was not just reading a book, but was actually watching a thriller of epic proportions. The details were well illustrated, down to the minute that the picture became so vividly clear like I was there at the scene of action.

Reading through the book can be quite addictive as it was written in an exciting yet down-to-earth relatable way that would most likely fill a large spectrum of its readers with nostalgic feelings of déjà vu.

The plot is made up of two parts, a sort of back and forth with one part recounting Mick Casey’s WW11 escapades as airman fighting against the Nazis while the other part dwells on E. Casey’s adventures as he struggled to make ends meet, without minding the risks. However, both parts have enough thrills to keep the reader glued to the pages.

Another aspect that makes For I Have Sinned very interesting is the way the author goes the extra mile in describing characters in the book, such that they literally jumps in one’s face!

Aside Casey’s WW11 memoirs and his blood chilling near death encounters, the plot revealed to a large extent, all the activities that usually take place in the underworld of drug dealing, human trafficking, prostitution rings and other gangster crimes that occur behind the scenes.

The book is not just about gangsters and actions but equally has more than its fair share of funny laughter inducing lines and descriptions—reading some sections of it had me practically rolling on the floor with laughter. Most people that read the book would probably feel same way too.

At 350 pages long, the book may be average or fairly large in volume depending on individual assessment, but one thing that is not in doubt is its ability to keep you flipping through its pages till the very last.

For I Have Sinned is a classic by all standards!