Home > KICKER ONE (Going the Distance) 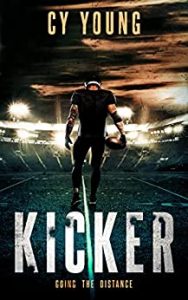 Frankie Scarmazino, a famous NFL kicker who was still nursing a thigh injury decided to take a break in a small town called Jasper, and also use the opportunity to investigate Jack Kehoe’s violent death. He was his friend’s brother and he had promised to help while also using it to hone his skills as a private investigator. Unknown to him, Kehoe’s murder was the third in a series of brutal murders within the past six months. However, things were destined to turn nasty when he confronted a group of rowdy men who went by the name Wife Beaters Club of America. At the opposite end was Mira Strickland, a beautiful attorney and women’s right advocate with an intriguing past.

Trying to establish a motive for the murders or who could be responsible would eventually become a hard nut to crack.

A unique feature that makes Kicker One absolutely enjoyable to read is the funny but flowery way the author describes characters and scenes as they unfold in the book. This is a crime story that would keep readers engrossed to the end.

BIO: Mr. Young began his professional career as a member of the Meryl Abbot Dancers at the Em- pire Room of Chicago’s Palmer House. After a year on the road dancing the “Steam Heat” number in Pajama Game, he repeated the per- formance in the New York City Center produc- tion. He appeared Off-Broadway in T h e Boyfriend and Diversions and a revue at New York’s Blue Angel by Chicago’s Fred Ebb. On Broadway, Cy was featured in a revue, Girls Against The Boys starring Bert Lahr, and was a principal in Subways Are For Sleeping, a Comden & Green musical. Simultaneously, he was a reg- ular performer in revues at New York’s elegant Upstairs At The Downstairs nightclub and can be heard on many Upstairs recordings. He is also a featured singer on Ben Bailey’s Painted Smiles albums of Rodgers & Hart and Jerome Kern. Next came a national tour of Once Upon a Mat- tress in which he played Prince Dauntless to Buster Keaton’s king, followed by a tour of On A Clear Day starring Howard Keel and Karen Black. Mr. Young stopped the show each night with Cy’s spectacular rendition of Wait ‘Til We’re Sixty Five. Called to London by Diversions director Steven Vinaver, he starred as Bobby in Sandy Wilson’s Divorce Me Darling at the Globe Theatre and can be heard on the original cast al- bum. Cy’s most recent performances were in Oklahoma City’s Lyric Theater’s productions of The Music Man (Mayor Schinn) and George M (Jerry).

Mr. Young has had three plays published by Samuel French and three musicals produced in New York City Off-Broadway. Other writing credits include over 40 radio plays for Heartbeat Theatre in Los Angles, animation scripts for Rankin Bass, 2 optioned screenplays, and 3 children’s musicals which he recently produced for performances in the New York Public School system. Cy’s song, Draw Me A Circle, is on the Barbra Streisand Third Album and was used to open one of her early TV specials.

Cy is a member of Actor’s Equity Association, Screen Actor’s Guild, and The American Federation of Television and Radio Artists. He holds an Active Membership in The Dramatists Guild as well as The Author’s League of America and is a graduate of Northwestern University.