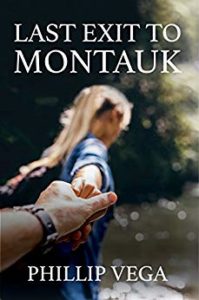 Last Exit to Montauk is like a memoir, albeit a very interesting one. The protagonist was recalling his teen years and all the adventures that go with youthful exuberance, as they occurred back in the 1980’s.

The book is as comical as it was nostalgic. The author’s unique way of narration, through the worldview of the protagonist can keep the reader reeling between laughter and chuckles all through the book.

The narrator, through whose eyes the story is told, had more than his fair share of sibling rivalry with his belligerent kid brother, a protective Latino mother who was respected in the community and had a noble career as a doctor, but couldn’t spare the use of Spanish curse words when upset. Belle, the beautiful family dog completed the character make-up at the home front. However, the narrator’s nostalgic recollections were mostly about events that occurred with his twin friends, Hannah and Jean Paul, as well as his crush, B.

Reading through Last Exit to Montauk could be likened to a time travel back to the 80’s as parallels were drawn with the things that were obtainable then as against what is available today.

The story captured what growing up must have felt like for teenagers before the advent of gadgets such as mobile phones, Play station games and Google among others.

The book has all the trappings of what growing up is all about; the protective dos and don’ts by the parents, the devil may care attitude of the teenagers, the adventures, and of course the sort of agape love that normally exist between the opposite gender and how they usually transform into romance with time.

The characters are fairly developed along with a plot that flowed seamlessly; both attributes effectively ensured that Last Exit to Montauk had no dull moment despite being 650 pages long!

The story has a tragic ending, as a car accident terminated what could be described as modern day Romeo and Juliet love affair or better still, the epic soul rending effect of the Titanic shipwreck.

It would require a heart made of stone to read till the very end without getting moist in the eyes.

BIO: Phillip Vega has always been a storyteller, but he’d never put pen to paper until August 2015. Suddenly, he had a publishing contract, and in the midst of the vortex of marketing, analytics, refining, and continuing to write, he discovered what he defines as his true calling, his passion. He is now fully and happily immersed in the whirlwind that is the publishing industry, even as he diligently continues his work in software sales.

Phillip is a Long Islander with Hispanic roots, now living Florida, and it is from those memories of summers in Long Island that he crafted his first novel, Last Exit to Montauk.

Phillip lives in the Tampa Bay area with his wife of twenty-three years. He has four sons and “two and a half dogs,” which actually is four dogs, but three out of the four are Chihuahuas while the fourth is a shepherd mix. So he calls it at “two and a half.”

Comfortable in a room full of people or one on one, he welcomes opportunities for guest appearances, interviews, and book signings.