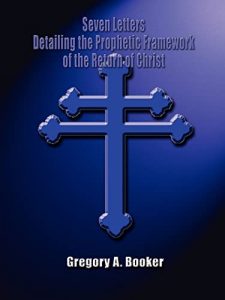 Over the years, a lot has been said about the prophetic return of Christ. However, it is rare to find any book that is as detailed as the Seven Letters Detailing the Prophetic Framework of the Return of Christ authored by Gregory A. Booker.

The author explained about the second coming of Christ while making references to the New Testament. He stated that Jews and the state of Israel are pivotal to God’s plan about the end times; beginning from 70 A.D. to 1948 when they were stateless (a period of 1,878 years), through the events that occurred during the six days Israeli-Arab war to the present were all part of it.

The book contains seven letters, each with dates when they were written, following a revelation the author had. However, one striking unique feature about this book is the mathematical calculations about past and contemporary events, and the remarkable correlation they had with the scriptures, as recorded in the Bible.

This book will be a delight to readers who want a radical and detailed spiritual explanation about why the world is passing through such turbulence and where it will end.

BIO: Gregg attended DePaul University majoring in music & business. Then did self study of eschatology for more than 20 years and also received a certificate of ordination from Ministerial Seminaryo of America (MSA) and was moved to write his first ever book. Is now issuing reprinted edition “Seven Letters Detailing the Prophetic Framework of the Return of Christ”.