Home > STOLEN BY THE VIKING 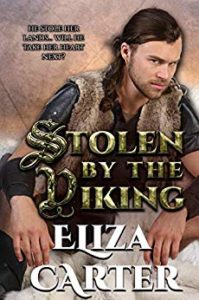 The book captured the activities that happened in Europe during the dark ages, when monarchy was widely practiced and scores were often settled through violence. Tilda was only a nine year-old pre puberty girl, but she was already wise and knowledgeable. During the early years, Kenneyth was hoping to marry her at the right time and granted that he was physically appealing and strong, features that most other girls desired, but Tilda was different. Kenneyth’s lack of humor was a turn off for her. Unfortunately for Tilda, it was a time period when decisions were largely made by men and she was married off to an old man who already had two other wives and she later regained her freedom after his death.

Cultural rivalry had remained fierce between the Saxons and the Danes; however, Tilda will later fall in love with Soren, a warrior of the Danish Viking, despite being a Saxon and they fought together for what they believed in.

Although Stolen by the Viking is written in contemporary English, yet it has lots of the old version sprinkled all over it to conform to the era the plot dwelt on.

Anyone who found the classics Shakespeare wrote as enjoyable, would definitely enjoy reading this book too because they share lot in common.

BIO: Eliza Carter writes steamy historical romance with hefty doses of humor and suspense. She is the author of the Loch Bana Lairds and Vikings in Love series.

She lives in the Ocean State with her bearded husband and two fantastic daughters, as well as a surplus of fur babies. She loves the man and the girls more than life itself, but it pays to give the animals a surfeit of attention sometimes, to keep the humans on their toes.

Eliza loves to hear from her readers. Connect at www.elizacarterwrites.com.