Home > SWAY: A Message of Perseverance and Faith 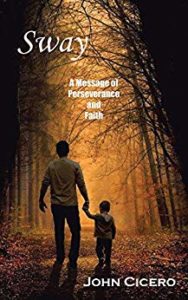 At only sixty-nine pages long, Sway is one of the shortest books one can read yet among the most awe-inspiring. This nonfiction story can easily move anyone to tears as the story unfolds on Ryan Kerry’s struggle against the vicissitudes of life. Life is not a bed of roses as the popular saying goes, but neither is it supposed to be a bed of thorns as Ryan must have felt at some points. An attempt to remove a little sunspot from his cheek had gone horribly wrong, only to leave behind a hole the size of a golf ball!

Most people would easily give up that things can’t get any worse but in the case of Ryan, it was just the beginning of his travails. An ultimatum to move down south or lose his job followed and as if that was not enough, his adorable wife was diagnosed of probably the worst form of cancer—pancreatic cancer!

However, against all odds, Ryan did not give up. He persevered in the face of hopelessness and ultimately, things began to take a miraculous turn for the better.

Like other harrowing true life stories of such magnitude, it would require sheer determination for the reader to hold back the tears from flowing freely.

This is certainly a book to be recommended to anyone facing life’s challenges so they can draw inspiration from it and keep hope alive.

BIO: John Cicero is the author of Sway and the  Rainbows Shadow Series. He writes fictional, spiritually themed novels set in adventure settings; stories sprinkled with symbolism, suspense and inspiration.

A current Cleveland Clinic executive, John has also previously worked in sports management for the NFL as a marketing executive for the Cleveland Browns. John is a passionate weekend writer with a love for movies and books written for screen adaptation. His most important love is his wife, children and growing family.