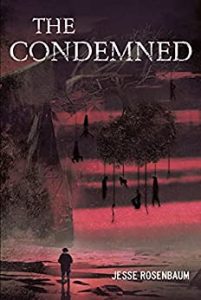 Michael was in his last year at college but the prospects of what future lies ahead of him weren’t so bright. A huge student loan was hanging on his neck; a debt he would have to pay back once he starts working, but again, chances of getting a good job was minimal. As if all that wasn’t enough trouble already, strange things began to occur to him, beginning in the form of bizarre dreams. Eventually, Michael would have to save himself as he battled to help Orrix overcome the evil forces. Unfortunately for them, they were up against a mortal enemy.

Other characters in the story include Kayla, Tom, Prof. McVicker and Olivia among others.

The Condemned is a scary horror book that would certainly send chills down the spine of the reader, especially as they try to visualize the gore, violence and unnatural occurrences that involved the un-dead.

This book is highly enjoyable and would be a delight for anyone that has knack for horrors.

BIO: I was born in Dunellen, New Jersey, raised in Green Brook, New Jersey and I now live in Vero Beach, Florida.

To my earliest recollection, I have had a love for horror since I was two years old. My parents, for some reason, used to let me watch Stanley Kubrick film of Stephen King’s ‘The Shining’. I used to watch that tape over and over. They probably regretted that decision when one day when I was two or three, I put a yellow plastic baseball bat through the back window and said, “Mommy, I’m home!”

I loved to read as a child and spent a lot of time in the library researching the paranormal and supernatural. In high school, during my sophomore year, I started to write poetry due to a class assignment. I wrote a lot of poetry through high school into college, but had wanted to do something more.

By the year 2000, I had decided that I wanted to try to write a story like one of my favorite authors Richard Matheson or Stephen King. My debut novel, The Condemned, is that story. Shortly after that decision, in 2001 I had met a friend in college, who’s name was Mark. We connected immediately and shared a love of writing. We worked on a few projects together, which sadly never came to fruition because in 2003, Mark was killed by a drunk driver. From there the wind was just completely taken out of my sails for writing. I would dabble in it over the years that followed, but it never felt right to me, not without my friend.

In 2019, I decided I was going to finally do something with my stories, so here we are. I’m very happy and honored to share my stories with you all. I hope you enjoy reading them as much as I have writing them.