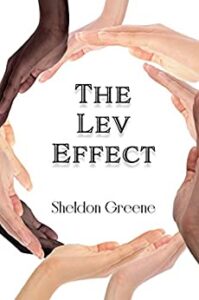 Nudelman wanted a decent Jewish school to be built in Bolton but he didn’t realize how difficult it would be to establish one, nevertheless he was determined to give it his all, even if it means getting a director from Russia and making use of old people’s home.

Mendel knew he has feelings for Estelle and he could tell it was quite mutual but he couldn’t get himself to make the decisive move until Lev appeared in the picture. Is the man from the socialist country going to be a competition and possibly take Estelle away from him? It was a question he has no answer for but only time would tell.

The story is told in a witty and down-to-earth way through Mendel’s perspective. It also captured the sociopolitical and economic issues that were prevalent prior to collapse of the Soviet Union.

The Lev Effect is an enjoyable book with interesting characters.

BIO: Author Sheldon Greene Releases New Literary Novel – The Lev Effect
A lyrical, funny, feel- good read for troubled times
In The Lev Effect, Sheldon Greene “wisely explores the salutary power of faith, which protagonist Mendel calls a “kind of spiritual walker for the psychologically disabled” in this profoundly funny meditation on how one can find strength in religion.” Kirkus “This author’s style will sing to your soul. I strongly recommend you read this, absorbing its hauntingly beautiful melody in its message.” Book Review Crew

When the Bolton Jewish Community converts a disused retirement home to a boarding school, hires a Russian refugee to direct it and the retirees as staff, the small town of Bolton, Pennsylvania celebrates the change. When the director admits a Palestinian boy, schedules Palestine National Day and a fundraiser for a Catholic homeless shelter, the family that endowed the retirement home sues to regain their trust fund. Some think he is a fraud, others believe that he is Jesus Christ. The Lev Effect, is the sequel to the critically-acclaimed novel, Lost and Found.

About the Author:
Sheldon Greene’s seven novels explore universal themes like the end of ideology. Ranging from fact-based history to flights of imagination, he explores diverse subjects such as, Jewish influence on pre-Colombian culture, Germany after World War II, the impact of the Holocaust on creativity, and the dissolution of the United States. Lost and Found, The Seed Apple and The Lev Effect, share a common narrator.

Greene was appointed Warden of Insurance of the State of Ohio at age 23. A public interest lawyer, he pursued seminal issues— such as the United States’ flawed health delivery system, the impact of illegal immigration on the economy, renewable energy, and public land policies— decades before they achieved national attention. He is an executive in a wind energy development company and has been actively engaged in renewable energy for over 25 years. He advocates the formulation of a God concept derived from the life process. He has developed personal guidelines for a balanced, seamless life with spiritual, intellectual, social, and creative dimensions.