Home > This Ain’t My Life: One man’s journey to finding his Destiny 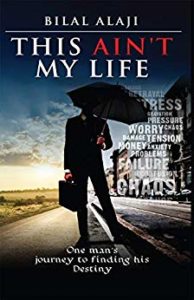 Apparently nonfiction, the story began as Bilal narrated all that transpired during his formative years. One could easily feel the emotions and a sense of foreboding when he related the issues he faced for not only being someone of color but also as a Muslim child in an environment that wasn’t all that friendly to people of such background.

Bilal didn’t speak too highly of Abi, his cleric father who he felt wasn’t there for them when they needed him most. On the hand, he recounted nostalgic episodes he experienced with his mother, Ummee, while growing up.   Life took a new dimension for Bilal, albeit for the worse when his kid sister died at infancy, and his parents continued to drift apart until they finally separated.

Bilal’s lifestyle captured the imperfections of humans. He had his shortcomings, especially in his inability to relate with others socially during the early times at school while his strong points also counted for him, particularly his intelligence and skills.

Youthful exuberance got the better of Bilal and he got Melisa pregnant, to the disappointment of his parents. Ummee wanted an abortion but Abi advised him to marry Melisa according to religious tenets.  Bilal heeded his father but it turned out to be an unsavory experience that would haunt him for most part of his life.

Bilal had to deal with lots of setbacks, especially in his marriage with Melissa. The constant struggles with the ups and downs of life. Being scared of allowing his children to experience the emotional turmoil that often occurs in broken homes, after considering the negative impact it had on him and his sisters during his formative years.

Despite being a true life story, this Aint My Life is indeed gripping, emotional, thrilling and full of lessons than many fictional stories.

Got to be added on the same shelf with other classics!