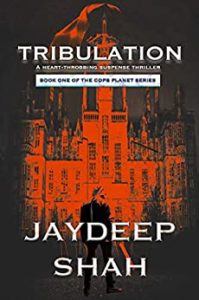 Casie and Alex were not just lovers who got married eleven years ago, but they were also partners in crime. They were both as ruthless as they were mien and together, they had murdered a lady in cold blood after forcing her to sign some documents. However, as they travelled to a villa mansion where they hoped to celebrate their eleventh wedding anniversary in a small party organized just for the two of them, strange things began to happen in the haunted mansion—the same place they had committed the murder six years earlier. It wasn’t long before they realized they were facing a tribulation as the ghost of the murdered victim was on a revenge mission.

Reading the Tribulation feels very much like watching a horror movie, complete with all the chills, gore and adrenaline buildup. The author equally did a good job of describing scenes and activities in such a way that what is happening becomes so vivid in the mind of the reader.

At 118 pages long, the book is quite small and has relatively few characters; however, it is action-packed and can keep anyone on their toes as they read from the very first page to the last.