Home > A Bloody Stiletto, Cold Lasagna, and a Bestseller 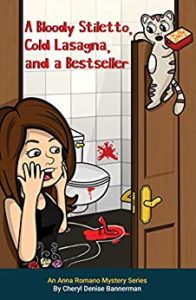 One striking thing about this book is the apparent ease at which the story flows, especially with the author’s use of simple and relatable words. The characters too are well developed,

The plot has an interesting set up considering that the protagonist is a writer while her fiancé is a detective and in-between were two murder cases that need to be unraveled. Both Anna and John were directly involved since it was Anna that accidentally discovered the bodies while John was among the team of investigators. However, while John was a career detective who is doing his assigned duty, Anna on the other hand was an inquisitive writer whose is always curious and eager to get to the root of every issue but always end up getting herself in trouble. There wasn’t a single dull moment reading the book as the momentum kept building laced with unpredictable suspense.

A Bloody Stilletto, Cold Lasagna, and a Bestseller is an urban fiction with lots of witty lines that can bring about chuckles and smiles from readers. Virtually everyone will likely enjoy reading the book.

The major setback about the book is in the way the plot was presented. The story as contained in the book was told from different characters point of view which is not unusual, but the author ought to have indicated which particular character is telling the story and at what point by writing their names at the beginning. I had a difficult time figuring out which character’s viewpoint is being relayed between Anna the protagonist, John her fiancé as well as Sherman, the antagonist.

A Bloody Stiletto, Cold Lasagna, and a Bestseller is no doubt a thrilling work of fiction.