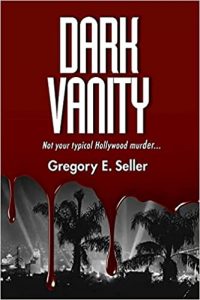 Blair Kilian was a successful British actress, and was hoping to become a sensation in Hollywood. She was on track towards achieving her dreams until she witnessed what seemed to be a suicide on the face value which was followed by series of mysterious happenings in quick succession. Unknown to Blair, it was a high-wired conspiracy with her at the receiving end.

Then the dark secrets that must remain hidden at all costs….

Other characters in the book include Reid Garrett, Alton Price, Derek Christopher, Cameron Haines, Margo, Tony, Landon, Reams and Faye among others.

Granted that the characters are well developed and the plot equally rich, but what stands the book out as a classic is its fast-paced nature and lots of red herrings that will keep the reader on the edge as the story unfolds.

Although Dark Vanity is a fictional story with a plot that was set on Hollywood, it perfectly captures the sort of activities that trail the industry as well as the worldview of movie personalities and celebrities—and of course, the length they could go to protect their reputation.

BIO: Gregory E. Seller is the author of two works of fiction, including Vanquish of the Dragon Shroud, which U. S. Review of Books called a “sharply written, fast moving thriller”, and was a Featured Book of the Month. Pacific Book Review said it was “reminiscent of Hitchcock thrillers!” His second novel, Dark Vanity, debuted in June 2021 as a Hollywood thriller about a famous screen actor who is also a sociopathic blackmailer, extortionist and murderer of other stars and Hollywood “A-listers.” Pacific Book Review awarded it a starred rating, calling it an “intensely absorbing mystery.” Gregg is at work on his third novel.