Home > Acts of the Women 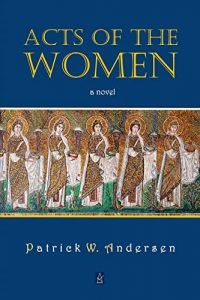 After the death of Jesus and subsequent resurrection, all the women that were connected to him and his disciples faced difficult times. The tragedy and turbulence that followed it was hard to bear but they decided to be courageous by supporting one another in order to weather the storm.

Although this book is a fictional but intriguing story that mirrors the Biblical New Testament, yet there are variations to the actual Bible story. For instance, the mother of Jesus was said to be Miriam instead of Mary, the story also narrated that Jesus was dark in complexion and had six siblings—James, Judas, Joanna, Simon, and Susanna. The book also recounted already known Bible stories but from a different perspective with fictional characters

Acts of the Women is no doubt interesting to read and even comical in some instances as both known and unknown characters interacted in a rather thought-provoking way.

BIO: Patrick W. Andersen enjoyed an award-winning career as a writer and editor before applying his skills to fiction. He has published a collection of short stories and two novels. He and his wife live in San Francisco.