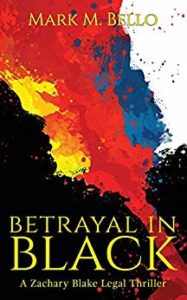 This book began on a tense note as Randy Jones, a patrol officer, came across a car that was riding past, and mistook the occupants to be the two Burger King Robbery suspects still at large.  Unbeknownst to the Black couple returning from a fair with their two children at the back seat, trouble loomed.  A chase down by the cop and a little misunderstanding between them led to the fatal shooting of Marcus Hayes.

The incident would lead to an investigation, and some of the findings suggested that Randy could be a racist cop since he had been involved in a similar stereotypical and illogical use of firearms against African Americans in the past.

Lots of intrigues would ensue as a lawsuit was filed against the city and the Cedar Ridge Police for human rights violations, as Sarah Hayes went in pursuit for justice.

Betrayal in Black is an emotional story that mirrors some of the police brutality and shootings by racist cops against Black Americans.