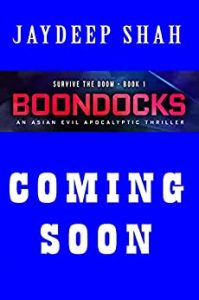 Four enchanters invaded Kendraa village with a mandate to resurrect a churel that died five thousand years ago. Through stories passed down the generations, the villagers were all acquainted of how the blood-guzling churel almost decimated their forebears before they were saved by divine intervention.

An Indian man and his American girlfriend were on an expedition when they lost their way and ended up in an isolated village deep in the desert. While Rahul felt a sense of foreboding, Elisa thought it could serve as an adventure when they were taken to a strange cave. Their alarm bells were triggered when they came across skulls and bones in rooms smeared with blood. However, it was too late as they realized the enchanters were about to sacrifice them in their evil bid to unleash the churel against humans. It is now a race to save not just themselves from imminent death but also the rest of humanity. Would the locket given to Rahul by his grandma be of any help?

Boondocks is a thrilling book that will keep readers engrossed till its last page as necromancy, black magic, wizardry, spells and sorcery takes center stage—the world is not going to be the same anymore!

BIO: Jaydeep Shah is an avid traveler and a multi-genre author. As a bachelor’s degree holder in Creative Writing, he aims to entertain as many as people he can with his stories. He is best known for Tribulation, the first book in the “Cops Planet” series.
​
In addition to those books, The Shape-Shifting Serpents’ Choice, Jaydeep’s first young adult flash fiction written under his pen name, JD Shah, is published online by Scarlet Leaf Review in their July 2019 issue. Currently, he’s endeavoring to write a debut young adult fantasy novel while working on a sequel to his first apocalyptic thriller, Havoc.
​
When Shah is not writing, he reads books, tries new restaurants, and goes on adventures.