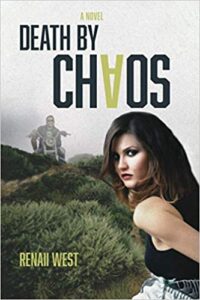 Four distinguished but very different young women arrived college as freshmen only to discover they were going to share a small room. One was exceptionally brilliant, another was a beauty queen, then a dope smoking troublemaker and lastly a sex symbol—a perfect combination of strange bedfellows.

A murder in campus and subsequent frame-up would lead to intrigues and a long drawn investigation, with far reaching consequences on the four goddesses of Room 407.

Death by Chaos is an interesting book that captured the lifestyles and activities many college students often get involved in. This is a book most teenagers will love to read.

BIO: Renaii West has been writing and performing from an early age. After earning her Bachelor of Fine Arts degree, she became the dramatic arts instructor in a performing arts program, where she wrote and directed many of her own productions. Desiring to spread her creative wings, she is now creating fun-loving and sometimes quirky characters who inadvertently find themselves in the middle of a mystery and must use their wits and cunning to solve the case. Her passions and hobbies include mythology, classic films, travel, belly dancing, Tango, yoga, jigsaw puzzles, and, of course, mysteries