Home > IN DUE TIME 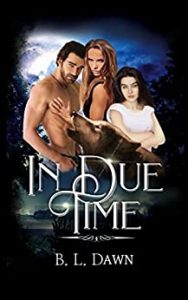 In a hybrid world of humans, shifters and witches, the wolf shifters would find themselves doing everything possible to discreetly integrate with humans in order to thrive and channel resources back to their packs. However, there was growing evil all around them and the use of magical powers to stem them has become necessary as they jostled between the cities and woods.

Tatum’s memory loss was affecting her but it wouldn’t be a hindrance from loving Luke. She was a Beta while her mate was Alpha. Would Adina be able to see again and literally find her true love, just like other betas and alphas?

What does Destiny have in stock for them all, would Jenny be healed of cancer as promised by Zachariah, a vampire?

However, in the meantime, they would have to join forces if they must stop the evil and extremely violent Raz who raped human females for fun.

In Due Time is a thrilling fantasy novel but it has lots of X-rated contents thus making it only suitable for adults.

BIO: Hello Reader, this is B. L. Dawn.
I live an average life with my husband and two sons, two cats, and my giant dog, who thinks he is a lap dog.
I work full-time and write between spending time with my family and cleaning the house.
I have many more books coming soon from the Times Series. Tatum’s adventure continues as she discovers who she is and what she is capable of while helping the shifter race.
There are other stories such as Adina – Snippets In Time 2.5 that we can all look forward to as well. Please leave a review to help indie authors make their way into the writing community.
I appreciate your support. Thanks for everything.