Home > Stuart Duffelmeyer and the Masters of Plagues 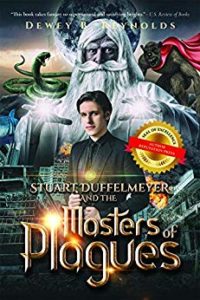 A group of friends who were about to graduate from the NYU campus decided to play a nasty prank of sexual nature on one of them who apparently was a nerd. Anthony was the instigator but he was able to get Meghan, Dana and Prudence as co-conspirators, and they all had a phobia for rats, ants, bees and bats respectively.  Although, Anthony was from a wealthy Jewish background, yet he had to deliberately select probably the worst rat hole that stands for a motel, deep inside the most dangerous part of Bronx. As if that was not enough scare already, they had to gather other weird and creepy things like a bag filled with slimy maggots, a remote controlled sex doll and a twenty gallon slimy gray liquid. It was to be the mother of all pranks, a nasty fun activity they all will remember for the remainder of their lives—at the expense of Stuart Duffelmeyer, the nerdish best graduating student who was largely believed to still be a virgin.

The prank had John, Taylor, Abdullah, David, Taylor and John as the remaining co-conspirators, and each of them understood their roles perfectly.

The prank was successful and a thoroughly humiliated and heartbroken Stuart vowed in-between tears to pay them back in their own coins.

Stuart will soon acquire supernatural powers given to him by the ruler of the universe and with his new powers was the ability to avenge the humiliation he suffered in the hands of Anthony and his fellow pranksters.

The book is intriguing, full of suspense, fantasy as well as a sickening effect associated with horror stories.

BIO: Dewey B. Reynolds is an author, screenwriter, short filmmaker, and computer expert. He is the author of Stuart Duffelmeyer and the Masters of Plagues. Dewey currently lives in his hometown of Kansas City, Missouri.