Home > THE ANMORIAN LEGENDS: The Wrath of the Exiled 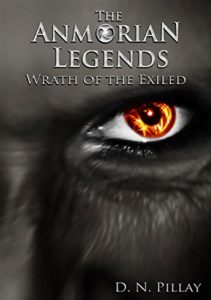 One unique quality about The Anmorian Legends is the descriptive yet refreshing way the author relays the story.  The indebt analysis on the character as well as what goes on in their immediate environment, down to the minutest detail, helps the reader to have a clarity which creates an emotional attachment with the book.

Rezaaran rose fast through the ranks from his humble beginning as a cadet, and was soon a force to be reckoned with in IRIS, but Cosmonox, his much older partner in the deadly battle against the Kalarans wasn’t as fortunate. Badly injured and on the throes of death, he was turned into a robotic hybrid to save him, but on returning home, he discovered that life wasn’t the same again and his lovely wife who couldn’t adjust to what he has become, had to leave him.

Ashana had lost her parents when the Dominion army invaded her planet and destroyed everything in sight including her parents and most others but she had managed to survive, and grew up in IRIS where she became a general. At first, she had felt that teaming up with Rezaaran as instructed by Orin was a bad idea but she later struck a partnership with him that proved more than a handful against enemy forces in their numerous intergalactic battles.