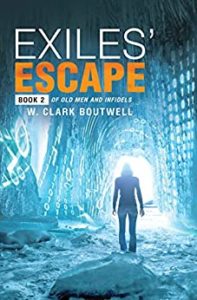 Exile’s Escape is a fictional work with a futuristic dateline of events that occurred around 2127 and 2129, in what used to be referred as United States of America, but now divided into two separate states known as The Democratic Unity and The Restructured States of America—Fallout of American intervention in the 3rd Iraqi War that ended in disaster for the United States. The combined forces of Iraq, Pakistan and Iran had unleashed nuclear arsenals that wiped out American forces and years after, a revolution and rash of coups ensued that led to the dismembering of the USA.

The plot centers largely on Malila Evanova Chiu as she sought to be free from the oppressive forces of the Unity State, long after child protective services took custody of her based on allegations of gross child abuse leveled against her parents, and ultimately her encounter with Jesse Johnstone. However, the story is told from the perspective of several characters contained in the book, such as; Jesse Aaron Johnstone, Lieutenant General Eustace Tilley Jourdaine, Speaker—the plant man,   Hecate Hester Jones, Jeremiah Rhedd, David Roberts, Eddie etc.

The book is quite thrilling and as a Sci-Fi, the use of advanced equipment/gadgets, especially by the Unity State was common such as the CORE, O.A, implants, robots, R-ships, Bio-Generated-Interface and CRNA—zombie troopers which is complimented with a number of diverse characters as well as a futuristic plot that has political undertones, albeit farfetched.