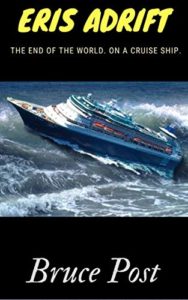 The book began on an interesting note and the reader could feel the zeal of the narrator as she talked about her experience in Montego Bay somewhere around Kingston in Jamaica.

I could feel it was going to be an adventure when the protagonist stated she was in a boat sailing off the waters of the Caribbean Islands.

The protagonist, Julia Martin was actually an entertainer inside a massive cruise ship and the story was viewed through her eyes.

The writing structure of the book is simplified and quite easy to read and comprehend. However, as the story progressed, there was a twist in the plot when the calm atmosphere in the cruise ship was replaced with anxiety when reports started streaming in with details of how political crises that began in Eastern Europe was fast spreading and snowballing into a global turmoil of apocalyptic proportions.

Captain of the cruise ship puts a call through to the US navy to ascertain the situation of things but was warned that his route was in the line of fire and they could face possible attacks from the natives or worse still pirates who were taking advantage of the crises. One could feel a sense of foreboding as the cruise ship crew weighed their options and began to take stock of the food, water and medical supplies they have on board while hoping that the its 3600 passengers doesn’t go into panic.

One could draw a parallel between Eris Adrift and the Titanic in many aspects with the difference being that while the latter happened a long time ago with ship wreck and icy waters resulting in massive tragedy, the former was taking place in contemporary times with a different dimension to its risk factors.

Eris Adrift could be a work of fiction unlike the Titanic but its plot isn’t farfetched as what took place in the book could probably still happen someday in an unpredictable world like ours.

BIO: Bruce Post is an award-winning playwright, published novelist and teacher of theatre. His plays have been produced in New York, Los Angeles, Kansas City, Washington D.C., Connecticut, and Martha’s Vineyard. He is published by Broadway Play Publishers, Smith and Kraus and the Dramatic Publishing Company. He is the recipient of the 2012 Playwrights First Award and the 2003 John Gassner Award. His novel, Fleeing Steady Habits, was published July 2016, by Black Rose Writing and is available at Amazon and Barnes and Noble. He has completed a trilogy of novels about experiencing the end of civilization while on board a cruise ship. All three parts, Eris Adrift, Eris At Rest and Eris At Home are available at Amazon. Bruce teaches HS Drama at the Waterbury Arts Magnet School. Currently, Bruce continues to write and teach in Connecticut.