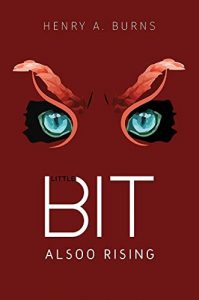 Little Bit is a captivating science fiction book about a colony where humans lived and interacted with other extraterrestrial beings. The humans, the Alsoo and the Rynns, each with their own unique cultures and technological advancements—all faced challenges both within their respective groups and others.

Some of the character names are quite unique and funny, and some groups speak a distorted form of English, particularly the Alsoo.

The book captures the reality of what living with extraterrestrial beings could be like, albeit in a more realistic way.

Little Bit is the type of book that will push your imaginations to the very limit. Will the relationship between the strange groups eventually end in an enduring peace or would it result in an apocalypse? Only time will tell.

BIO: Henry Burns was born in Brooklyn and grew up listening to his grandfather tell stories of the old country. He wrote his first story based on one of his grandfather’s tales. Writing took a back seat to earning a living and it wasn’t until he retired that he could return to writing stories. He now lives in San Francisco, with a wife, two cats and three bearded dragons and writes when they let him.