Home > The Right to ReVenge 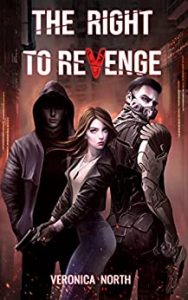 J and her sisters were part of the rebels trying to escape from an authoritarian government with search for every female gamma still ongoing, it means she would have to be on the run. However, with the death of her sisters, J had one goal in mind, to revenge, and also to help save innocent lives no matter the challenges.

The Right to Revenge is a thrilling science fiction about human mutants and a dichotomy between Alpha, Beta and Gamma species. Government finds itself at loggerheads with the masses; the cleaners against the rats.

I must say that how events are narrated; the scenes, the mindset of the characters, the environment and down to the minutest detail is very impressive. It helps the reader to create pictures in his/her mind as they imagine what is unfolding as the story progresses. Also, the fact that there isn’t any fluff but continuous action as one pulsating scene seamlessly weaves into another, would ensure that the reader won’t get bored but instead experiences suspense and an urge to get to the end.

The suspense, intrigues and red herrings toward the end of the book are so unpredictable and feel like a movie. I also enjoyed the ending; it felt natural unlike the happy ever after sort of ending that is common with many works of fiction.

The plot has varying scenes that include mortal combat, with blood and gore splattering on the arena while spectators cheer for more, as well as intergalactic warfare.

The book has a unique and strong plot, and coupled with its well-developed characters together yields a Sci-Fi that is absolutely entertaining to read. A classic sci-fi that will keep the reader engaged till the end.

BIO: I write, I dream, I live by listening! I always feel like music surrounds my texts, so I tend to have a soundtrack for everything.

I experiment with genres.

It will make me so happy if you like my work 😉