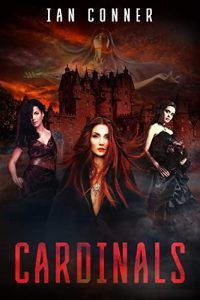 Asherah was the queen in heaven, until she planned a revolt against her husband, the supreme ruler. The insurrection failed and she was dethroned and caste upon the earth alongside fifty of her followers. She was dejected and decided to take out her frustration on humans. Her onslaught on earth was far reaching and began before the recorded Biblical era of the Old Testament and over the centuries to the present day.

From the moment Asherah dropped on the summit of Mt. Hermon, peace left the world. As she wreaked havoc; leaving blood, sorrow and anguish on her trail.

Although Cardinals is a work of fiction but it captured some biblical events which were interwoven to create a thrilling fantasy story.

BIO: Ian Conner is retired military and spent most of his adult life as a Marine and Army Infantry Sergeant. Now living near San Diego, California, with his wife Bonnie, a cellist, and their two dogs, Cookie and Isabella. Conner spends his days fostering kittens, gardening, crafting beautiful stained glass, and creating worlds on the page.
Conner has authored other novels