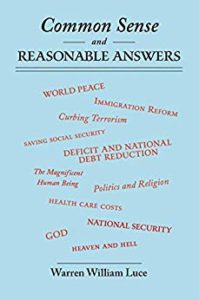 As one begins to digest the contents of this book, it becomes pretty obvious that the author is going to open a Pandora’s Box. The authoritative but intelligent way two of the world’s most sensitive topics (i.e. religion and politics among other knotty issues) were dissected got me on the edge and my curiosity heightened.  I have read different accounts from diverse authors on such sensitive issues in the past and most times it becomes a turnoff when the biased viewpoint of someone is passed off as factual. Therefore, when I discovered that Common Sense & Reasonable Answers was devoid of prejudiced pettiness, I heaved a sigh of relief.

This is one hell of a book I know I’ll always revisit in the future considering how it touched on many of the troubles we are encountering today, especially within the United States and globally. From the out-of-tune lax gun laws that have resulted in a disproportionate number of deaths from firearms, to the religious dogmas that seem farfetched when viewed under strict logical lens as well as the Republican VS Democrats rivalry and down to terrorism. Luce was thorough in his writing, and I guess the title of the book did justice to its contents because he did not just lay bare most of the problems the United States and indeed the world is facing today, he equally went the extra mile to proffer what appears to be well thought out solutions towards solving them.

The author revealed a lot about the plethora of challenges the United States is facing, which are yet to come to the open either by omission or commission. He drew parallels with other nations across the world and the result of his analysis is quite frightening to say the least. The most shocking is the comparative analysis he made with China, a country that Western Media always portrays as lacking in fundamental human rights for its citizens among other negative attributes, but turns out to be doing better in certain areas that nobody would ordinarily have imagined. I never did myself, at least before now, but considering that facts and figures are rigid and verifiable by anyone, I have been in utter shock with the revelations so far.

The author touched on virtually every facet of life in America, from jobs to economy, national debt to healthcare system and security, and also on Christianity and the Church with thought provoking ideas on human existence and the afterlife.

Common Sense and Reasonable Answers is not just a book that is recommendable but one everyone should endeavor to read!

BIO: Warren “Bill” Luce is a retired USAF colonel who has served his country during three wars beginning with WWII. After serving a tour in Vietnam, he began to see the futility of endless wars that solved nothing, only serving to cause suffering, death, destruction and hatred. Warren was excommunicated from his church for questioning their dogma that God sends people, including little children, to suffer eternal hell because they are not perfect or do not believe in a certain religious doctrine. Despite that, he has a strong belief in God and the teachings of Jesus Christ. He is an optimist, believing that humankind will eventually rise to the occasion and bring peace to the world, the destiny that was intended for us. Warren intends to convince the world that is so