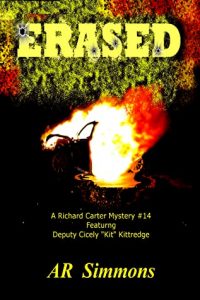 Deputy Kittredge or Kit for short was a former college athlete and country girl who took up a job as investigator in Hawthorn County, Missouri. Within a span of three years, her natural intelligence and smartness came handy in helping her gain a reputation of competence. However, she found herself on the spotlight when a dead body (code named City Boy) was found in the woods and she was assigned to take charge as the lead investigator in unraveling the mystery surrounding it. Her situation was made worse due to certain workplace prejudices and a misogynist colleague who kept breathing down her neck.

Regardless of the challenges, Kit was determined to sift through the smokescreens and red herring in ensuring that justice was served.

Erased is a classic crime novel that is highly entertaining to read.

BIO: AR Simmons grew up in the Missouri Ozarks. He walked a gravel road to a rural school evocative of “Walton’s Mountain.” His parents did factory work to buy things not provided by their subsistence farm which was passed down from his grandfather who cleared the land from the native forest. He and his wife (beta reader, illustrator, and muse) still live on that Ozark farm. So his roots run deep in the Ozark soil. Using the culture, language, and mores of this “Bible Belt” region, he writes culturally immersive stories of obsession set amidst the small-town and rural life that he knows and loves.

He began writing seriously with a suspense novel which he serialized around the turn of the millennium on his website www.bluecreeknovels. It took until 2013 for him to publish the first Richard Carter novel (Bonne Femme) as an e-book. The series now includes fourteen mystery/suspense stand-alone stories that also chronicle Richard’s life with each story spaced about a year apart. This required a year-by-year update to the technology available to the characters because time marches on.