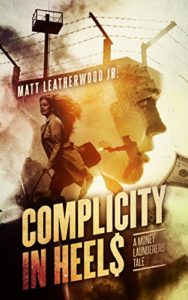 The plot of the book commenced as Nikki was let out of a maximum security prison, after serving a few years and being granted parole. As she rode in a chauffeur-driven limousine, her old accomplice, Spence, updated her about the new methods their syndicate now works with and how she fits into the picture.

Complicity in Heels is a thrilling gangster book that has no dull moment right from the very first word. The characters are largely well defined and are mostly the sort that would be found in the underworld where violence, money laundering, drugs, crime and life on the fast lane seems to be the norm.

Lieutenant Bosky was a cop by day and gangster at night, and he facilitated dirty deals so long as he gets paid for his roles. However, what he never envisaged was his lovely daughter being used to blackmail him.

Some of the other major characters in the book include Cordoza who was the leader of the crew, and was as clinical as he was authoritative. Lacey, Cordoza’s mistress who was always at loggerheads with Nikki. Victor was a gangster and womanizer who loved having fun. Quinn was a drug lord and Victor’s ruthless boss.

Unknown to her mates, Nikki was an undercover agent and the intrigues all added in making Complicity in Heels quite fascinating to read.

BIO: A veteran of the Iraq war, Matt Leatherwood Jr. concluded his final enlistment in the Marine
Corps with two hand-written journals of his experience in hand. Those memoirs later became the basis for his first book, Train to Baghdad (2004).

Disillusioned by poor sales and marketing, he
walked away from writing altogether. Seven years later, while attending a church service,
Leatherwood was challenged by the pastor’s message to start writing again.

Complicity in Heels marks his triumphant return to the craft. This debut novel is a taut, suspense/thriller that is sure to get your pulse racing.