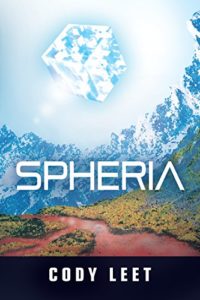 Spheria is a work of fiction complete with its fair share of fantasy. However, the book has lots of theories and facts, and each chapter commences with quotes that were made by famous people.

The book plot is divided into two, one part centers on Max, the nerd gifted with extraordinary intelligence in the area of physics and computer while the other part dwells on alien kind of creatures such as the Polyans, Zalisks and Troetens—all referred to as Spherians living in an isolated terrestrial space. However, the Polyans distinguished themselves as the most intelligent among them.

Lema belonged to the Polyans and in her attempt to become a Lumen Seeker, she had to get to a distant land, which required her to pass through treacherous landscapes but she was with Sama who had been a dependable guide until she realized she would have to do most of the task alone. It was then she became aware that the task was not only difficult but life threatening as well considering that her chances of making it hung in the balance.

In his research station, Max and his team of scientists need Qubes—a glowing kind of crystal that is gotten from Polyans. The Spheria Project was being financed by Graham, the eccentric billionaire from Australia. Unknown to Max and the others, a third party was interested in the project but it will be fatal if it eventually falls into the wrong hands. At the same time, a deadly supremacy battle was raging among the Spherians within their colony.

Spheria is a classic science fiction filled with lots of suspense, intrigues, violence and gore, and it builds up to a pulsating end.

BIO: Cody is an American writer with a passion for technology. He likes to explore the convergence of science, mythology, and philosophy and can’t wait to see the future unfold. He believes the best stories teach while entertaining, and make us think a bit along the way.

He lives in Connecticut with his wife, four kids, a dog, cat, and 20 fish. Cody holds a degree in Computer Engineering and in a prior career was a video game designer and artist for a major publisher. For relaxation he enjoys sailing, skiing, traveling, programming, games, and, oh yea, writing.