Home > Malila of the Scorch 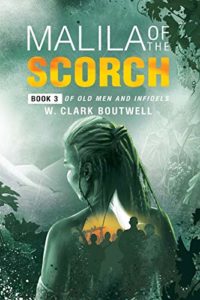 This book is a sequel of sorts to Exile’s Escape but with some new characters such as Edie, EffieCee, Elise and Cain. The beginning has Grandpa Moses who was a witness some of the events that happened in the past, now recounting the exploits of Malila and the others to his grandchildren namely Anton, James, Nathan, Lilyanne, and Lizbeth in the presence of Grandma Sally.

As Moses goes down memory lane to bring back to life, the story that shaped the lives of the iconic personalities; some of whom the kids have read about in books. The dateline changes once again, as they are taken on a time travel backwards. However, it is interesting to note that the books viz-a-viz the events that occurred in them are refreshingly different.

Attacks by the Unity State continued against the RSA but as Malila was trying to escape, Jourdaine captured her at the Rapart. However, Splanch was able to save Malila but she was shocked to realize that Splanch was not just a plant, but also has healing powers and the ability to speak.

The book is quite enjoyable to read, however, its plot and character make-up is more of fantasy in nature.