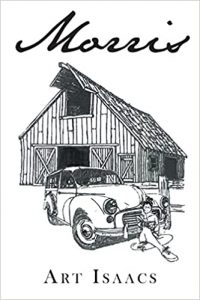 Everyone around Jessie Peterson seemed contented with life in Florida, but to him, it was as boring as hell. To help make things a little livelier, Jessie’s teacher gave him a task to chronicle everything that was happening around him. What began as a school task eventually snowballed into a captivating story.

Jessie was in love with Kathy but after being saved by Lora when he was lost in the middle of nowhere, a part of his heart couldn’t stop thinking about her. Even though he would fight to maintain the status quo but fate had other plans for him.

Each chapter of the book begins with an apt lyrical quote that gives hints about what to expect in that chapter.

Unlike some other fiction books that can be drab, Morris is a highly captivating book and covers areas like romance, family life, and adventure. Also, it’s an eye-opener about the past and how much the world has changed as characters from different generations narrated real life gripping stories that would keep the audience reading from the past, to the present and even the future.

Morris will surely make your day!

BIO: Anyone who has met or spoken to Art for more than 5 minutes knows his passion for his family and for cars.

Born in Brooklyn, New York, Art went to public school, college, met his wife, was married and initially settled there. As times changed, his work as an engineer began to take him across the country and abroad, starting in the Western Hemisphere and later to Asia.

As a New Yorker, exposed to different cultures, ethnicities and attitudes from an early age, he was always comfortable with, interested in and intrigued by his friends’ and associates’ varied backgrounds and histories. After 10 years of working at a refinery in Brooklyn, Art moved to the apparel industry which led to him working hands-on with local management and staff at factories and mills in more than fifty countries around the world over the next 35 years.

Hong Kong became his second home, as he started working there and other Asian countries in 1998. He ultimately lived in both Hong Kong and China for several years. Back in the US, he’s moved around to live in a few states and cities, but if awakened from a dead sleep and asked where he was from, he’d still say he’s from Brooklyn.

A husband, father and grandfather, he most enjoys visiting and taking trips with his family, spending time working in his garage or just going for long drives with his wife in one of their classic sports cars. Of all the titles he’s held throughout the years, Pop-Pop is his most prized.