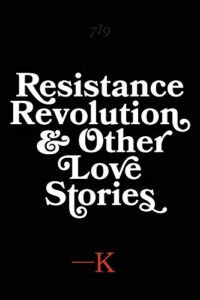 This book is a collection of twelve short but interesting stories. One notable factor the reader will easily notice is the distinctiveness of each story i.e. they are all diverse in nature that no two stories are alike. In essence, it feels more or less like reading twelve books in one booklet, albeit their abridged versions. While the first story is called Radius, with a plot that revolves around the Middle East cultures and Islam, its protagonist named Mustapha was on a journey of self-discovery in a turbulent region. The next story called Calamity Jane is about a man named Jay who had to put up with a fiery lady called CJ, a shortened form of Calamity Jane.

The stories may be short but the author did a good job of summarizing them perfectly in such a way that its reader won’t feel discontented that some things were missing in the plot.

Resistance, Revolutions & Other Love Stories is the type of book one can find handy when traveling, or other solitary moments.

BIO: K. lives in Malton, Ontario, Canada, with their spouse, five children, an American Wirehair cat and a Quaker parrot. An anti-war advocate, K. studied English, Religion and Philosophy at the University of Toronto. K. has been published in Meat for Tea: The Valley Review and Junto Magazine.