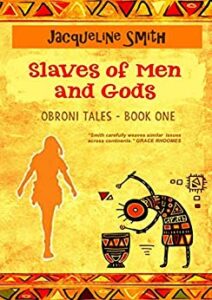 Krisi was born in Scotland to a Ghanaian father and Scottish mother. Life was fun and she was looking forward to a bright future. However, when she turned 15, she received shocking news that she was leaving Glasgow for Africa! Not only where her parents separating, her medical doctor father was going to complete his PhD in Accra and was taking her along against staying with her alcoholic mother.

Other characters in the book include Samuel, Shona, Jack, Morrigan, Madam Darkuman, Precious, Kofi, Wisdom, Gifty, Joe among others.

The culture shock Krisi experienced in Ghana was beyond her wildest imaginations, as she found herself immersed in a clash of culture, tradition and religion—a setup that was in stark contrast to the life she lived in Scotland and it would require a lot for her to pull through.

Slaves of Men and Gods, is a highly entertaining and enlightening book most readers will certainly find intriguing. It equally has a glossary page that explained the local terms/phrases used in the book.