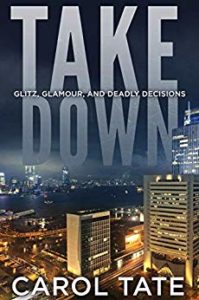 Take Down is a fast paced thriller that commenced with violence and gore when Lily escaped from Richard and fought her way through the heavily guarded nightclub. It was a carefully laid out plan by their father for her to seduce Richard but she couldn’t stand him and ended up blowing their cover. However, there was going to be dire consequences for disobeying father. The old man was as ruthless as he was ambitious and not even Lily’s twin brother, Kyle, could talk him out of torturing Lily and forcing her to marry Richard. To him, it is only the end that justifies the means and anything could be sacrificed in order to achieve the desired result.

Jason was loved by all in his family, but an encounter he had with Lily when he visited their nightclub with his friend, Leon, culminated into a love affair that will ultimately bring him on a collision course with Lily’s dangerous family.

At 490 pages long, Take Down is quite voluminous but regardless of that, the book has a rich plot and well developed characters that makes the story very engaging to read. Take Down is thrilling with lots of action that makes it akin to watching a movie through the pages of a book.

BIO: Carol Tate is the author of Heartbeat, and Take Down and has a Diploma in Applied Writing, she writes thrillers for her ever-elusive sanity surrounded by chaos, family, and rescues.