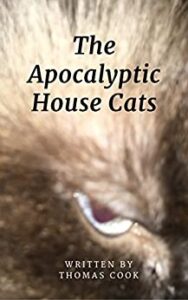 The story is about two house cats named Sasha and Ava who were abandoned in their home during the apocalypse. It is a very unique and interesting book, in the sense that the story was narrated through the worldview of cats and other animals.

As humans were all taken away, following the apocalypse, the animals they left behind took over the world. In a desperate attempt to survive, dogs formed roaming packs and other animals made necessary adjustments to their lives in order to adapt to a new world devoid of humans. Of the two sister cats, Sasha was older, wiser and more cautious while Ava was inexperienced, more daring and full of youthful exuberance. Although the odds were against them, but they were determined to survive at all cost.

The Apocalyptic House Cats is a unique novel that projected distinct animal feelings and emotions like they were humans.

It is important to emphasize that although this book would be an instant hit with kids and the young at heart, it would also be enjoyable to everyone else.