Home > The Bartender: Appetite for Destruction 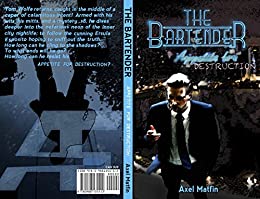 This book is a continuation of The Bartender series. The story began as Tom Wolfe; the protagonist was taking stock of his life and what was happening in the society. He still had no clue about who was on his trail or why he had to watch over his shoulder, but he was determined to find out.

When the powerful and well-connected O’Donnell contracted Tom on a rather dangerous task of infiltrating an organization, Tom thought he could strike a good bargain but unfortunately for him, O’Donnell wasn’t willing to pay much yet he was determined to get the maximum result through coercion. Worse still, Tom would have to bear all the risks alone should anything go wrong—nothing must be linked to O’Donnell.  Tom knew he was swimming in shark infested waters and had to do whatever it will take to stay alive.

The Bartender is a thrilling crime book that covered some of the activities that take place in the underworld, including drugs and murders.