Home > IN TIME ALL TRUTHS ARE REVEALED 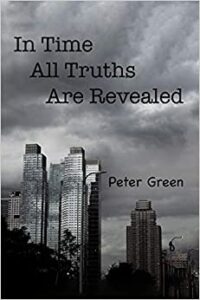 Roberta sold marijuana for a living. Holed up in an old building within her close-knit little community, everything had been alright until Rocky’s sudden death. The death of her dog and only companion left her lonely and vulnerable. The business environment had become increasingly dangerous and fears of being arrested by the authorities’ persisted or worse still, ending up tragically in the hands of her high risk customers but Roberta was neck deep in a rut with very slim chance for escape. On the opposite side were Jimmy and his wingman, Eddie; two efficient law enforcement officers with good records until they were entrusted to unravel the murderer of Natalie Blumberg. What they thought was going to be an open and shut investigation with all evidences found turned out to be a smokescreen that will eventually lead to the opening of a Pandora’s Box.

One particularly striking factor about this book is that intriguing I-have-been-there or “I have experienced this” déjà vu feeling it gives. The events that took place in the book and the way they were chronicled feels so natural and easily relatable.

Aside its entertaining value, with lots of thrilling unpredictable twists and turns, IN TIME ALL TRUTHS ARE REVEALED is another pointer that the long arm of the law often takes its course to a logical end, no matter how long it may take.

BIO: Peter Green was born in England and came to the United States with Vidal Sassoon as part of the British Invasion. Since then he has been variously a hairdresser, stockbroker, student, businessman, entrepreneur, and author of “The Hit and Run”, “A Shot In The Dark”, “A Simple Ride Home”, “Things Have a Habit”, and “Everybody Lies.” His new book, “In Time All Truths Are Revealed,” is about to be published. He is currently working on his seventh Jimmy Dugan mystery called, “The Poker Game”. He has been married for 50 years, lives in Connecticut, and has three children and five grandchildren.